Is the Left heralding the apocalypse?

Home » Is the Left heralding the apocalypse?
Oct 27

Is the Left heralding the apocalypse?

The following post is my personal opinion that I’ve devised over the course of many years of research and debate. It’s important to note that I DETEST both extremes, i.e. the fascist alt-right and the socialist Left, I see any blind ideology as dangerous.

First let’s define “apocalypse”, which is a favorite term and quite the buzz word, but in reality the meaning is “Without Rule of Law” (WROL), or the next stage of “Excessive Rule of Law” (EROL). In WROL there will be total anarchy, where the police and military are unable to control the population – all the municipal and governmental services will stop, there will be a “Wild West” mentality and everyone will have to fend for themselves. Soon after, gangs and groups will form, and later on the EROL state will ensue – a state where a very tough and unfair tyrant will exchange freedom for security and dictate the law as they see fit.

Click the image below to watch the video:
Is the Left heralding the apocalypse? 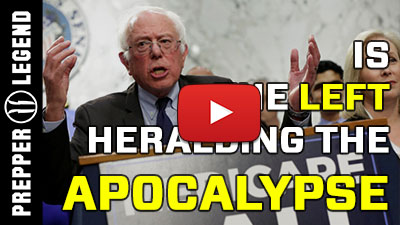 Group identity politics
The alt-right is extremely easy to ignore and ridicule as they flag their racist agenda, but in today’s world the Left is masking their ideologies as more subtle and compassionate, like minority rights, gender equality and so on. This means we can’t easily identify and dismiss them as extremists.

During the last few years, the political Left as a group in many countries in north America and western Europe, started to push forward socialist agendas, and started forming “group identities”. Each person within these groups identifies with people who share similar traits, such as race, gender, age, and so on. For example they see all young, white males as being part of the same group. There are no individuals with personal opinions in these groups, and people are judged by the groups they look like or identify with. In essence, this system is creating “tribes” that are in a constant state of war with one another.

This, in turn, creates a major divide between these tribes, whereas people from one tribe won’t even talk to people from a different tribe, since in their eyes they are simply wrong (or a slew of other extremely negative descriptions like bigot or misogynistic), so there is no point in doing so.

Each person in these Leftist (or alt-right) tribes is an indoctrinated drone, speaking and thinking as their tribe ideology dictates, and any individual opinion is frowned upon or even the cause of bullying, and eventually expulsion from the group.

Ignoring core values
These identity politics and Leftist ideologies have escalated to a point where core values are being put into question. The most important amongst them:

1. Freedom of speech
People are fighting and protesting to make the use of certain pronouns and trigger words or any hate speech in general illegal, and are getting angry at any inciting or emotionally charged topic of conversation. The issue is, who defines hate speech? According to the Left anything opposing their ideology fits that category. But free speech means the right to express yourself as you see fit without any repercussions, especially if it’s a controversial topic and thus inciting for sure. This of course excludes the call to violent action which has been illegal for many years. Fortunately we have people like Jordan B Peterson, Ben Shapiro, Joe Rogan, Steven Crowder and a few other brave individuals defending this basic right – thank you all for being on the frontlines! These heated debates taking place today will save many lives, since taking away this freedom will be a prelude to a totalitarian society.

2. The right to face your accusers
The #MeToo movement and the like have started a trend where people can accuse anyone of anything, and stay safe behind the warm blanket of anonymity. This movement has caused many people to lose everything, from their job to their family, all because someone accused them of something they may or may not have done. The tables have turned – in today’s society people are “guilty until proven innocent”, instead of the core value of “innocent until proven guilty”.

3. The right to life, liberty and the pursuit of happiness
The new late-term abortion bills being passed by the Leftists in the US are plain madness! They take fully grown babies just prior to birth, that are no different than newborns, and make it legal to perform abortion on them, all in the name of women’s rights! This in turn caused many people to realise that there is not much difference between a 40 weeks old baby (that is about to be born) and a 24 weeks old baby (which is legal to abort today in most US states). This core value is so dire that most of the country rallies behind it and calls it by it’s true name – Murder!

Drive for socialism
Many young Leftists wave the socialist flag overhead with pride – they say that the government should provide everyone with security and prosperity, it should control all the businesses and govern everyone with equality of opportunity and equality of outcome. I.e. everyone is equal in the eyes of the progressive Leftists.

This is a major issue, since everyone is not equally competent in different areas, in fact the most prominent difference is the preferences that men and women have in terms of interest – in the most egalitarian societies it’s shown very clearly that the gap between men and women has actually widened rather than closed. Men in general are more interested in things, and women are more interested in people, which is why most engineers and programmers are men, and most nurses and social workers are women. Moreover, different people are more capable in different areas, thus creating a hierarchy of value and ability in each meaningful endeavor.

Suggesting that everyone should have equality of outcome is so dangerous that every time it was implemented in the past century it resulted in hundreds of millions of deaths – from Stalin’s communist Soviet Union, to Mao’s People’s Republic of china, and even in recent years the terrible fall of Maduro’s Venezuela. When this socialist ideology is realized, all the productive people who have the means to escape, flee these regimes, as they can no longer profit, so there is no point in working so hard. Left behind are only the less fortunate and poor, which leads to the decline of the nation’s productivity, and to poverty, hunger, homelessness and constant exploitation by the government.

The End?
Throughout the history of modern society, every time the ideologies of socialism were executed a tyranny was soon to emerge, and thus an apocalyptic situation for the people of these nations. Every single time the government ended up ravaging the country and most citizens were left to fend for themselves, fearing for their lives on a daily basis.

If people won’t forgo their silly ideologies and start to open a dialogue between the tribes, it will get harder and harder to agree on things, and eventually the divide will be so deep it will lead to another civil war. If that happens, the US has a number of enemies that will jump at the chance to take over a weaker nation. If the US falls, it may cause a collapse of all modern civilization, as our consumer culture heavily relies on the US as the backbone of the world’s economy.

To Sum Up:
Modern society today is in turmoil on the political and moral fronts, from north America to western Europe – people are unwilling to communicate with their opposing tribes and the divide keeps growing. This battle is causing a lot of resentment which leads to contempt and then to vengeful actions. If we don’t stop bickering and start communicating with our fellow people within and outside our nations, this situation will keep getting worst.

Today’s Left or Modern Progressives (some identify as Socialist Democrats) are less than 10% of the population in western societies, but they control most media outlets, Hollywood, social media companies like Facebook and Twitter, and many major tech companies like Google. They are embedding their Leftist ideologies in everything people see on TV and the movies, or read and hear on the news. Moreover, they control most of academia, especially humanities, indoctrinating most of our children to their ways. We must be aware of this and make sure to be independent critical thinkers, and promote dialogue and free speech especially with people that have opposing ideas.

As civilians, now is the time to become more self-reliant and start preparing – as I’ve always said: “hope for the best, but prepare for the worst!”. Now is the time to start learning and practicing valuable skills that will serve you well both in emergency situations and throughout the rest of your life.

Will the Left’s unreasonable ideological crusade for tribalism cause a collapse?
Please share your thoughts with us – I love getting your feedback, and read each and every one of your messages!

Important Note: let’s keep the discussion civil – we’re all here to learn and support each other, rather than start an open season for more bickering.

For more information on how to prepare, pick up our free book “Prepared: The 8 Secret Skills of an Ex-IDF Special Forces Operator That Will Keep You Safe”, and start your journey for self-reliance right now!

If you liked this post please support us on Patreon so we can keep creating great content.